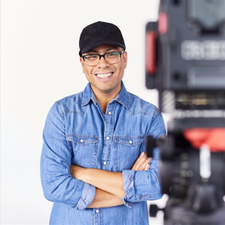 Chris dela Cruz is a seasoned online video director having produced over 1500 videos totaling over 2 billion views. He co-created one of the first YouTube channels to hit a half a billion video views and break over a $1 million in ad revenue. It was the most successful channel on the first YouTube Multi Channel Network (MCN), before being acquired by YouTube for a reported $60 million.